Apparently I’m now the sort of person that gets things on the midnight release. But it’s Ravenloft, so totally worth it.

I’ve literally just stayed up most of the night reading the new book, so here’s a quick broad-strokes review.

Ravenloft. It’s one of those names that gets people excited and nervous all at once. It was one of the original D&D adventure modules, which was a massive success and regarded as one of the greatest adventures ever. This was mostly because it was different to everything that came before: you weren’t expected to trudge through a dungeon, killing everything you met. It was mysterious, it was scary, the bad guy just popped up from time to time to ruin your day, and it was totally non-linear.

This latest release is a 5e re-imagining/re-release of that famous adventure. The characters are transported to a cursed land, ruled by an evil Machiavellian vampire, Count Strahd von Zarovich.

The Cursed Land of Barovia

Just from flicking through the book, the first thing that struck me is that this is not going to be an easy adventure to run! It doesn’t hold your hand and guide you through (either for players or the DM), it just drops you into this strange land and lets you figure the rest out as you go.

There’s a neat starter adventure (‘House of Death’ which you can download for free), but it’s assumed the players will start in a particular village and begin gathering information. However where they go from there is completely up to them. It’s entirely possible for the group to immediately go knock on Strahd’s front door and say hello (that would be a bad idea). Depending on how you play, that either sounds amazing or terrifying. For me, I’d probably say both!

One very nice idea is the Tarokka reading: early in the adventure the characters can visit a gypsy woman, who will read their fate using the cards. If you have a deck of cards, this can be done for real, even allowing the players to draw their own fate. Without giving too much away, the results of the reading affects the adventure, forcing the players to seek out the meaning of the reading. It really adds to the open feel of the game, as even the DM won’t know how the plot will unfold (unless you’re able to stack the deck in some way).

The vampire at the centre of the adventure is the heart and soul of the game (ironically). He can pop up every now and again to taunt and tempt the adventurers, keeping them on edge at all times.

The book gives you plenty of guidance on how the DM should play him, and how to maintain tension, but very few instances of ‘now have a big fight’. Played well, it could work wonderfully for never letting the characters rest, foiling the best of their plans, and generally making them feel like they’re just pawns in his game. However, I can see a bad DM (that’s me!) making a total hash of it, and failing to do any of this.

As you’d expect the book itself is gorgeous. Full of maps and illustrations, background information, and little pointers for the DM to inject life into the adventure. At the back of the book is a big pull-out map, including a full projection map of castle Ravenloft.

My only issue with all the maps is that they’re for the DM only. The Ravenloft castle map has all the secret doors, traps and treasure marked on it. So only one person in the group will ever be allowed to look at it!

There’s almost no new ‘crunch’ in this book – no new classes, archetypes or races, and only one new background. I don’t mind that myself, Ravenloft is enough of a departure from the norm that I don’t think you need much else. The background that’s there is nice, and would be ideal for a character native to Borovia. I would have like to see a Vistani (the gypsy people) as an alternate human ‘race’, but maybe that would have broken the game somewhat.

Is Ravenloft For You?

Ok, I’ve not read every detail of it, but the adventure looks great. Done well, this could be a fantastic horror-fantasy adventure, and a welcome break from the usual D&D murder-hobo adventures. But that’s the problem with it: it’s an intimidating adventure, and not one for a beginner DM. It also demands a little more from the players, and might bore the sort of player who just enjoys rolling dice and smashing things.

Once final point: this seems to be a remake of the original Ravenloft module from 1983. It’s been heavily updated and expanded, but if you’re old enough to have played the original, this might give you a sense of deja-vu.

I’m both dreading, and looking forward to running this module. I’m going to sign up for the Adventurer’s League, and hopefully get a regular session going. 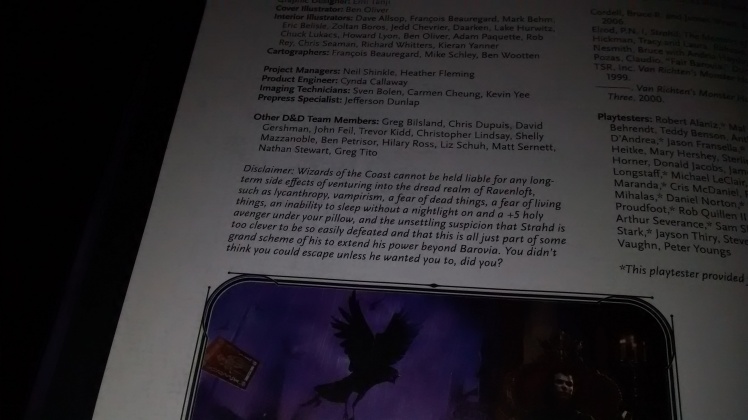 2 thoughts on “Curse of Strahd”