I shared my 5e guns post with the Reddit community, and got some great feedback. So taking that on board I’ve made some changes to my guns mechanics. If you read the previous post, you only need read the ‘changes’ section; if you didn’t read it, skip straight on to the main part of the post, which is a summary of the mechanics as they stand now.

I think I like this better as it gives more meaningful choices around armour. For example, do you go with good old studded leather (I couldn’t think of a better name for it – think leather jacket with emo spikes) for AC12 or do you go for the fancy Microweave suit that’s only AC10 but has resistance to small calibre weapons?

Having more powerful grenades means that the DM may have to restrict access to them at early levels (price is probably an easy way of doing this). A 1st level character having one ‘big bang’ for special occasions is fine, but a bag full of them might make things too easy.

Ok, so that’s the changes, here’s my updated list of arms and armour. 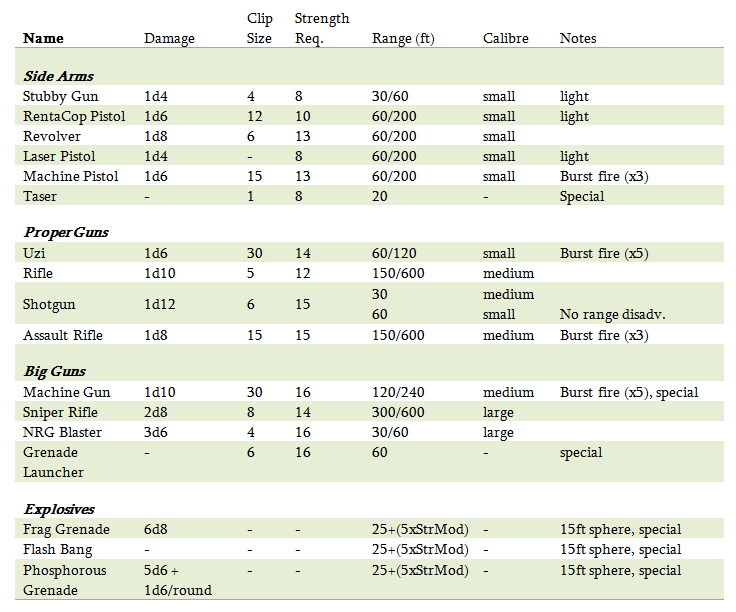 Taser: on a hit, target must make a DC12 Con save, or be stunned for 1d4 rounds.

Shotgun: due to the spread of the shot, a shotgun doesn’t suffer from disadvantage at long range (>30ft). Instead the shot is just downgraded to small calibre.

Machine Gun: this heavy, cumbersome weapon requires an action to setup before it can be used. Once setup it cannot be moved, and requires another action to breakdown.

Grenade Launcher: uses any of the explosive weapons as ammunition. Add your proficiency bonus to the save DC of each grenade.

Explosive Weapons: may be thrown or launched. Choose a location within range to be the target, all creatures within the grenade’s radius are affected.

Frag Grenade: creatures within the blast radius (15ft sphere) must make a DC12 dexterity saving throw. A target takes 6d8 bludgeoning damage on a failed save, or half as much on a success.

Flash Bang: as for taser, but to all creatures within 15ft sphere.

I don’t know which of these mechanics I prefer. The problem is how open to abuse they are by a high-level fighter with multiple attacks, and how well the system works when an attacker has advantage.

v1 gives the player a defensive disadvantage. Is it a large enough disadvantage? It might not be a factor if they can kill everyone in one round!

v2 slows the attacks down, essentially requiring a reload before and after each attack. I quite like the feel of that (players might spray bullets and then discard the weapon, matrix style), but does it just add increased complexity for the sake of it? i.e. “you can’t use burst fire as you’ve fired one bullet from the clip”

Edit: my final mechanics are below, ignore the numbers in brackets.

When attacking with a weapon with the burst fire property, you may attack normally or do one I’d the following: 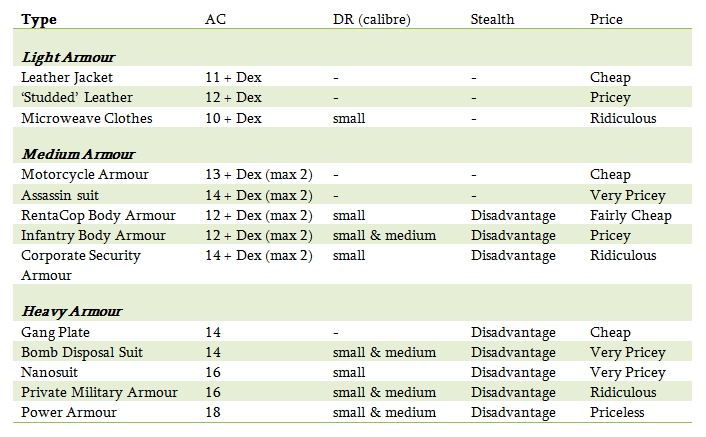 If an armour has DR, the calibre is noted, and the armour grants resistance (halve the damage) to bullet damage of this calibre.

I’m reasonably happy with the mechanics as they are now (apart from burst fire, as I mentioned).

Next up: classes and archetypes!