The latest Humble Book Bundle is a massive stack of Pathfinder stuff, for damn cheap! So this seems like as good a time as any to talk about Pathfinder, and how I feel about it.

Back in the dim and distant past, there was D&D. Then there was AD&D, then 2nd edition, and then 3rd edition, which was then ‘patched’ to 3.5. Pathfinder was released at about the same time as 4th edition (2009), and while 4th edition was totally new (and horrible), Pathfinder was intended to be an extension and rework of 3.5. So all the people that would have moved on to 4th ed didn’t (because – as I said – horrible), and started playing Pathfinder instead.

So Pathfinder has been around for 6-7 years, and is ridiculously popular. It’s got more content than for just about any RPG ever. But that also means it’s based on a rules system that’s now 15 years old, and from a time when D&D wasn’t cool like it is now, but played exclusively by nerds with terrible hygiene. 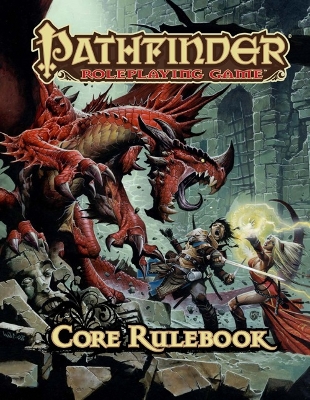 If you’ve ever played D&D, Pathfinder is almost second nature. Your character has the usual stats like strength, dexterity, and so on; you choose a class like fighter, wizard, or rogue; and actions are resolved by rolling a d20 and adding some numbers, to see if you beat the number you needed to. No problem.

My issue is that the role-playing is almost drowned under the weight of rules, character options, and other shenanigans.

Some RPGs like to be rules-light, and rely on the GM and players ‘winging it’ and making up something that sounds fun and fair. Pathfinder likes to give you rules for everything.

Let’s look at the stats for a typical enemy – an ogre. See how under defence it has 3 armour classes? That’s because some abilities rely on actually hitting an enemy (i.e. penetrating armour), while others just have to ‘touch’ them. Plus you might catch an enemy unaware, and so then they would then be ‘flat-footed’.

Speaking of combat manoeuvres, there are separate rules for each of them. And a character might be really good at say tripping opponents, but fairly useless at shoving them, depending on what feats and abilities they have (I’ll come to them later).

Pathfinder likes to give you a lot of options when you’re making a character and levelling up. Which is good, but there’s a LOT of options, and not all of them are equal.

Let’s say you’re making a new character. Keeping things simple, you’re going to be a human fighter, and so you get to pick two feats! Let’s look a the feat list…

Oh. That’s a lot of choice. Also notice how some feats have prerequisites that are other feats? So before you can be good at grappling, you need to take the unarmed strike feat. But in order to shove well, you need the power attack feat. In order to just grab someone and shove them, you need to be like a 4th level fighter.

That’s just one choice. If you’re a rogue, at level 2 you choose a rogue talent. It’s a neat idea, but one of your options is to leave an enemy bleeding after an attack, while another is…to crawl faster than normal. And that’s my main problem with all this ‘choice’. Some choices are inherently better than others, to the extent that it feels like a trap.

New content is always being created for Pathfinder. The problem is that it doesn’t all work properly, or inline with the old stuff.

Some things just overpower the old, meaning that a campaign with the core rules is very different to one that uses all the extras. The ninja for example, can do everything a rogue can, but a little bit better. That doesn’t really matter if everyone is aware of it, but it feels like a way of ensuring everyone buys the new stuff. Plus it opens up the possibility of some weird game-breaking munchkin behaviour.

There’s also a lot of ‘meddling’ with newer books, where the makers seem to want to create lots of new stuff, even when no-one wants it. One of the later books introduces the ‘roof-runner’ archetype for the rogue. This gives you a feature:

“At 2nd level, a roof runner can use her acrobatics skill to attempt a rapid descent from a rooftop or another surface, ricocheting against another surface and then diving through an opening (such as a balcony or window) directly below. So long as she has at least two surfaces no farther than 10 feet apart to bounce against, she can ricochet her body back from one to the next, descending great distances with a single check.”

Why is that not just a thing that any character can do? If I was a GM and a character had a high acrobatics score, and they described the above, I’d let them try it. But now it’s been written into a specific class feature, no other character can attempt it?

Should You Play It?

All of that was very negative! I don’t hate Pathfinder at all, I actually really like it. There’s just a lot of stuff, and loads of stupid fiddly rules, so that I’d never consider GM’ing it. Luckily I’ve know someone that does (and does well), so I can enjoy it as a player.

Deciding if any game is ‘good’ or ‘bad’ is basically impossible, they all fit into their own niches, and appeal to different people. But I think it’s fair to compare Pathfinder to 5e D&D, as they cover a lot of the same ground:

In short: Pathfinder is great if you’re a massive nerd. But in my opinion, 5e is better is most ways.

I look forward to the comments on this one!