My Curse of Strahd campaign is over, which means it’s time for new one!

We’re setting up a shared world in my friendly local game shop, The Dice Cup. The plan is to have several ‘campaigns’ which all occupy the same world, and so an action on one table (e.g. failing to stop the dragon destroying the city) can affect the others (who now find the city is replaced by a smoking crater). It also means that players can fill in details – e.g. the town they grew up in or the god they worship – and have that be added to the world.

This is the little bit of world building I/we have done so far. The Delver’s Guild will be a universal feature, and I’ve build the city of Shallal of start my campaign in.

Who really understands the mysterious Delver’s Guild? They have guild halls in seemingly every major city, but most are locked up tight, with no-one to be seen entering or leaving. Rumours abound of their membership and purpose, but it’s clear their interest is in one particular thing: adventurers.

The guild have (and use) the power to instantaneously transport people great distances, but this is almost exclusively used on those in the adventuring profession. The person or party that is transported is never questioned or informed about it, and no appointment or request can be made. If the guild has a reason for this interference it is never readily apparent: war, oppression and slavery can go unchallenged, while a trivial problem like rats in a basement may receive a full party of adventurers.

Despite the guild’s disinterest in visitors, over time the guild halls have become like shrines in the city, and small superstitions have developed. Adventurers will sometimes give a tithe of their loot to the guild, noticeboards with jobs may be posted, and those without a group may also loiter while they look for work. The greatest king or queen will show respect, and even a conqueror who razes the city to the ground will leave the guild hall untouched.

I guess it’s clear that this is a mechanism to let people drop in and out, and change groups easily. What I also like is how this affects the world: adventurers become like superheroes, who sometimes just turn up when you’ve got a problem. Or just interfere in matters they don’t understand and make everything worse.

The Free City of Shallal 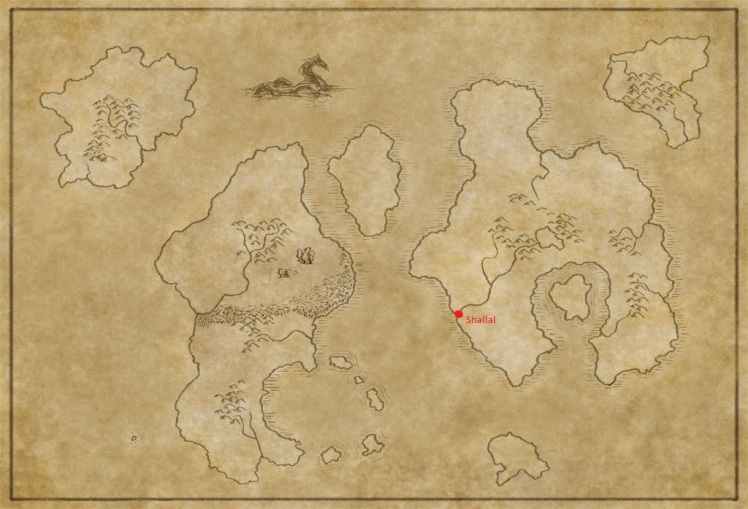 The city of Shallal lie at the mouth of the river Masdar, on the west coast of Mondus’ larger east continent – Joltan. The coast around the city is rocky and steep, and the mouth of the river itself is really more of series of waterfalls and islands; which would be impossible for boats to travel on, were it not for Shallal’s canal system.

In the deep past of Shallal’s history, a system of canals and locks were built, allowing access between the sea and the river Masdar proper. The city then grew around this trading route, collecting taxes from merchants and travellers, becoming the wealthy, sprawling metropolis it is today. As many locals say: “Shallal is the centre of the world”.

The city still sits astride the mouth of the river, dotted across dozens of islands, and criss-crossed with bridges, steps and canals. The islands range from almost a mile in diameter, to those just big enough for a single (wealthy) family’s estate. Further upstream, the water and air is fresher, and so the city is divided between the literal upper and lower classes.

The Council, The Yd and Albahr

Shallal is ruled by The Council – essentially just a large collection of nobles, merchants, soldiers, and others with the money and influence to gain power. The Council are effective at maintaining trade, defending the city, upholding laws, etc. But there’s a huge amount of politicking and many people seem to be above the law. Membership of the Guild is itself decided behind closed-doors by those higher up – Shallal holds no elections.

General policing is carried out by the guards, who administer justice on common laws such as theft, assault, etc. Secret policing is carried out the Yd. The Yd don’t officially exist, and talking about them publicly is… a mistake. The Yd rely on secrecy and fear to remain effective, and many citizens who upset someone with enough power often simply go missing.

A popular movement (/terrorist organisation) has sprung up in response to the corruption and inequality in the city, calling themselves Albahr.The group stands for worker’s rights, universal suffrage, taxation on the rich, etc. Officially membership of the group is illegal, and any demonstrations, meetings, etc are punishable offences. Many of the guards turn a blind eye however: as commoners themselves, they often have sympathy for the cause.

The river Masdar is massively important, both for trade and agriculture. Most of the surrounding is land is essentially dessert, and so all food is grown on the fertile soil within a mile or so of the river.

The main part of the river continues west and north from the coast, eventually splitting into several smaller branches which find their source in the mountains far to the north-west.

The coastline north and south of city is dominated by cliffs and caves, with many small islands and pillars off shore – plenty of places for pirates and smugglers to hide.

To the south of the city and river, the weather becomes warmer and wetter. Much of the southern part of the continent is jungle, and hides ruins of some long-forgotten civilisation.

After Ravenloft I think I’ve had of fill of dark gloomy forests for a while. I wanted to go in a different direction, and get some sun! With desert, jungle and ocean I can go for different monsters and

Hopefully there’s enough detail here to get everyone going in the campaign, but I’ve left enough holes that the players can fill in the details and help build the world.