Another new RPG! Well, new to me. I think one is a fair bit older than I am.

Tunnels and Trolls (T&T) was created in the days of the original D&D, and designed as a simpler alternative to that system. It recently had a Kickstarter to produce the definitive ‘deluxe’ version, and a friend of mine got a copy and ran a game of it.

The whole game can be played with six-sided dice alone, and there are far less compications in terms of classes, actions and leveling up. But is it any good? Well, I’ve only had a short session, but here’s my thoughts. 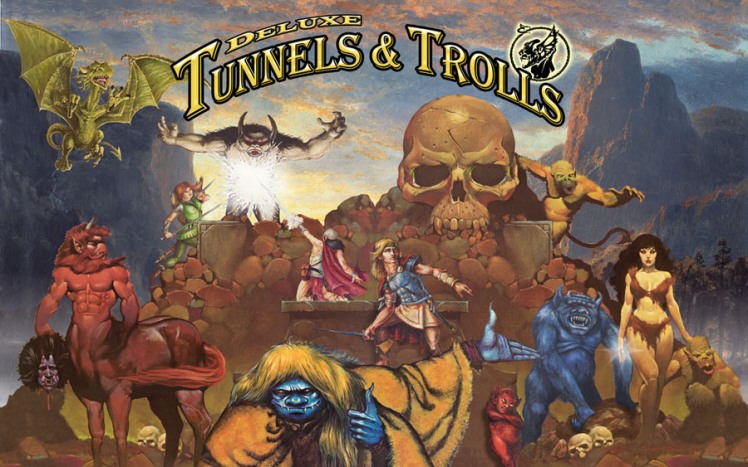 Overall, the game plays like any other RPG: describe something and the DM decides what happens. T&T tries to distill the D&D experience into a simpler system, while still having the fantasy/sword and sorcery feel to it.

Making a character is a seriously old-school experience! Roll 3d6 eight times and assign each number to a stat. Pick a race, and then use the multiplier to adjust your stats. Then pick a class – there’s only three – warrior, wizard or rogue (who’s actually less of thief and more jack-of-all-trades). I made a leprechaun wizard, who had a fair amount of magical power, but only had the strength to hold a small knife. And was reduced to half health by the first trap of the session. Yep this felt like original D&D!

If you try to do anything you might get told to make a ‘saving roll’. Essentially roll 2d6, add the relevant stat and see if you hit the number (e.g. a level 1 save would require 20, while level 2 needs 25 and so on). There’s also a doubles-add-and-roll-over (DARO) mechanic, which means that any character has a chance (however small) of making any save by outrageous luck.

As you gain experience (adventure points) you can spend them on making your stats better, so you’re better able to do things and can wield better weapons and armour. You can also buy ‘talents’ which let you flesh out the character by giving them extra little things they’re good at.

Combat is also resolved simply: no-one needs to decide individual actions or reaction or movement. You either cast a spell (or use a ranged weapon, but we didn’t deal with that) or join the melee. Spells are easy – they just go off, and if you’re in the melee you decide how many dice you have to roll and roll them. Generally a warrior is going to rolling handfuls, rogues a few less and wizards only one or two. The ‘monsters’ do the same, and then you compare numbers to see who did better. The difference is the damage the losing side takes (and you decide who gets it based on how you described the fight).

However there’s quite a lot of other factors to take account of too. Every 6 that’s rolled is ‘spite’ damage, and is applied to winning side; ranged weapons are dealt with separately (and require saving rolls), and do damage but don’t count towards the melee; a character can go beserk, in which case you may reroll some dice some don’t add the usual numbers to it; and so on.

In principle T&T is lovely and simple, the game is easy to pick up and flows smoothly. In practice, there’s a lot of number juggling, and you need to keep track of a whole series of things at any given time. I’m not sure the game is particularly fair or balanced, but I’m also not sure it matters.

It is old-school gaming, and whether you see that as a good thing will probably vary. The game is designed very much as a dungeon-crawl loot-fest, where you kill everything in sight to gain money and experience, get better equipment, stats and magic, and repeat. I think T&T would be a laugh for a weekend campaign, or casual sessions at events, but I don’t think I’d want to go through a long campaign in the system.

There’s quite a few of these old fashioned systems around (I guess some wierdos even still play AD&D). T&T is quite a lot of fun overall, and I’m looking forward to getting into it properly next session.

2 thoughts on “Tunnels and Trolls”