I’m back in the DM’s chair! Feels good. I’ve started a with a new group -some guys I’ve never met before (mostly)- organised through Dice Cup, my local gaming shop.

As you may have seen in my previous post, I recently bought the new D&D adventure ‘Curse of Strahd’, which I was a little excited about. Last night I started running the introductory adventure ‘Death House’. I was going to do a session report, but as a want to keep it spoiler-free (the book isn’t yet on general release after all), I’ll just do it in the most general way. 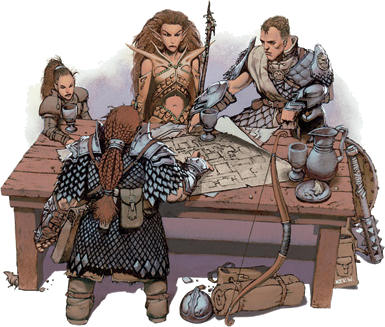 It’s always strange when organising a new session with a bunch of strangers. Do people turn up with characters pre-made, make them when they get there, or use pre-made ones? As it turned out, most of the guys were ready to go, or able to put something together quite fast. We also had quite a good party balance, with a fighter, ranger, paladin, rogue, warlock and bard (yes, I’m running a party of 6. Help!). I think a few guys might tweak their character for next session, as there was a fair amount of overlap, but it went quite smoothly for a first session meet-and-greet.

I’m a fan of cliche, so I had the group start in an inn. A fairly unremarkable inn, on a road to somewhere. I kept it to blank slate, so the PCs could add their own backstory, and the guys ran with it, coming up with ideas for how they got there and knew each other. We immediately had a pair of drunk nobles, a couple of lawmen relaxing after a successful arrest (and execution), and two scholarly travellers.

After a night of introductions and socialising, the group retire to their rooms. When they wake up the next morning, the inn seems to be deserted… 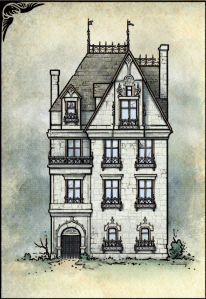 As I said, I don’t want to give too much away, but I really like the way Death House plays. It’s a brilliant introduction to Ravenloft, as it isn’t your typical dungeon crawl or fetch quest. The entirety of last night’s session was about setting the scene and letting the players investigate a spooky house for themselves. We only had one combat encounter, against a single enemy that was quite quickly dealt with (although it gave the rogue a good scare).

At first glance everything seems normal, but over time the secrets are slowly peeled away, until it’s clear that something evil lurks in the house. A group that rush in and start kicking in doors looking for a fight might get quite frustrated with this adventure, it benefits far more from a cautious investigative approach. And if the DM can foster a sense of dread and paranoia, all the better!

All the group have been told, is that “there’s a monster in the basement”. But so far they haven’t found a basement…

I’m going to be running this adventure/campaign weekly (hopefully), so I might not do a full session report each time, but report in every now and again to comment on how they’re getting on.

I should also mention that Dice Cup is a brilliant place to run a game like this. They have a dedicated RPG room, beautiful GeeknSon tables, and they also serve cake! If ever you find yourself in Nottingham, there’s no better place for tabletop gaming.

6 thoughts on “Curse of Strahd: It Begins!”