My Curse of Strahd campaign is rattling along now, and I’m pretty far behind on session reports. I think because of the nature of the adventure, there’s a lot of ‘plot’ that happens, when for a more typical campaign you might just have 2-3 sessions of dungeon crawl.

Anyway, this time around the group finally have their fortune read, and so figure out what they need to get done. And as usual: SPOILERS! I’m actually following the book reasonably closely (which is unusual for me), so reading this will ruin CoS for you.

We left the gang on their way to the Vistani camp near Barovia, to have their fortunes read. If you’re at all familiar with Ravenloft, you know that this is one of its big gimmicks: the card reading dictates where the adventure will go. In particular, it tells the party where the important items needed to defeat Strahd are, who will be a potential ally in the fight, and where to find the vampire lord when the time finally comes. It’s entirely possible that the reading the party puts all the treasures in castle Ravenloft itself (or some other massively high-level location), in the basement of the local pub, or anywhere in between.

A lesser DM might have fudged the draw, or pre-prepared what things they were going to get. Not me, I took it as the cards were drawn and went with it:

What I mean is that the cards gave a reasonable spread of interesting places and people to visit without me fudging anything. I was totally willing to pick other options if the cards had been a bit rubbish.

The full card reading went as follows, with quotes taken directly from the book:

Those that are paying attention will realise that they already have the first item: the book that they found in the old windmill! After some studying, they found that this was Strahd’s diary, and detailed his life, motivations and weaknesses. Handy.

Asking around the camp and the towns, they also found out the ‘drowned village’ probably referred to the ruins of Berez to the south. Nobody goes near it these days, for fear of the powerful witch who lives there (in other words: seriously guys, maybe leave this one until you’ve gained a few levels yeah?).

Wolves, hills and mountain lakes could refer to a few places, so they’d check them out as they travelled. Mountainside abbey however, almost certainly referred to the Abbey of St Markovia, so that was their next destination.

I’m going to skip over some uninteresting parts for the sake of brevity, but the party eventually got to, and into, the village of Krezk (where the abbey is located) after a few encounters with zombies, wolves, etc., stopping at Vallaki to get information on their card reading, and spending just about all their money on a barrel of wine to buy the Krezk villagers’ trust. 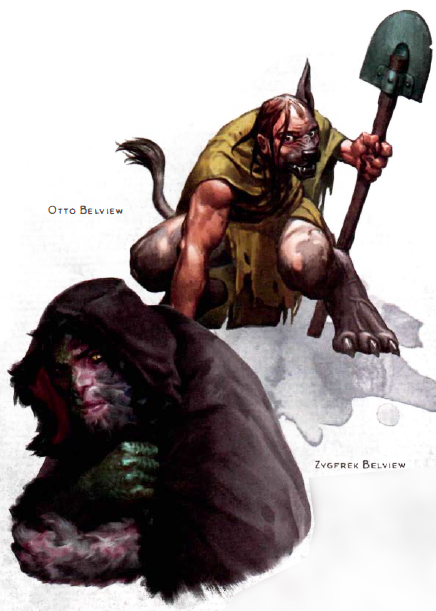 Krezk is a small, isolated village, but whose walls keep out the worst of the Barovian wildlife (they hope). The abbey used to be (a long time ago) a place of hope and healing, but is now another source of fear for the people. No-one seemed to come in or out, but strange animal-like noises can often be heard, and the abbey bell would ring at odd times of the day and night. Intrepid adventurers that they are, they didn’t let any of this put them off, and off up to the abbey they went!

Just inside the main gates of the abbey grounds, the party were met by Otto and Zygfrek, who were odd to say the least. Otto had a donkey’s face, and lion’s feet and legs, while Zygfrek’s face (and body from what they could see) was even split between furry and scaley. Despite this, they didn’t seem monstrous and were willing to talk to the party and escort them to the ‘Abbot’. On the way the party saw and heard several more interesting people-animal hybrids, including one poor woman with a bat’s wings and spider’s mouth chained to post in the yard.

The Abbot himself was a strikingly handsome man who greeted the characters warmly and had them join him for a meal. It seemed he cared for his ‘patients’ as best he could, and admitted he had a hand in their creation. Asked about the woman from the card reading, he revealed his pride and joy: Vasilka.

At first glance she appeared to be a fairly beautiful noblewoman, but after a close examination (and some very rude questions that upset her greatly) the group figured out the “more than the sum of her parts” bit – she’s a flesh golem! The Abbot has been using corpses from the village below and stitching parts together in an effort to create a bride for Strahd. He believes that if Strahd gets what he wants (his true love) then the curse on the land will be lifted. And who wouldn’t want a corpse bride?

I’m not sure that any real decision was made on how to deal with this situation. The Abbot told them that he needed a wedding dress before the bride could be presented to Strahd, and I think they just sort of responded with “Yeah sure mate. We’re off now. Bye!”

So it seemed the potential ‘ally’ was going to take some work. Next stop was the “den of wolves” that held the sword of sunlight, if only they knew where that was…

They decided to go wandering around some of the hills and lakes, to see if they came across anything (or got jumped by a gang of wolves who they could then track back to their den). They didn’t find the wolf den (yet), but sat on a little island on one of the lakes to the north, was a solitary, crumbling tower with an interesting-looking wagon parked outside.
After overcoming the traps on the tower door (and discovering the wagon was also heavily trapped), they entered to find a mostly rotten tower, but with a lift operated by stone golems who still responded to commands. At the top of the tower was a woman, who was understandably cautious of visitors and fired a few warning shots from her crossbow. In order to gain her trust, the party decided to let themselves in, fully armed and armoured, and go to the top of tower and say hello. This was not super effective, and the woman made her escape out the window (feather falling down) and to her wagon.

The woman in the tower was actually a Vistani vampire hunter named Ezmeralda. It’s basically her life’s work to defeat Strahd, and so when the group told her about the card reading and the clue to the weapon’s location, what better course of action than to go get it herself?

Over time she might have started to trust the party and regard them allies. But she’s like a level 12 character, there’s no way I was letting her just decide to join the party because they said hi.

Obviously the best way to resolve this situation was to chase her – one player even following her out the window and grappling with her. She went invisible and sent off her wagon as a distraction (did I mention her wagon can create spectral horses to pull it?). The rogue took this opportunity to break in and loot her wagon, throwing anything that wasn’t nailed down out the back, before jumping clear himself.

The party realised the woman didn’t want to talk to them, so let her go to catch up with her wagon. Where upon she came across the rogue – and all her stuff – in the road. Half-tempted to rip out his spleen, she decided he was an idiot rather than a threat, so simply paralysed him with magic and gathered up her belongings.

I was REALLY tempted to teach the player a lesson and just have her straight-up murder him for wrecking her things. But it would probably be a little out of character for her to kill non-vampires off the cuff like that. But still!

At least it means I don’t have to worry about the group gaining a powerful ally too soon.

With nothing else to do, the group continued searching the hills for a wolf den…

4 thoughts on “Curse of Strahd 4: The Gang Find the Plot”