After a 5-week break, we’re continuing with the Ravenloft campaign. As we left the adventurers, they were setting out to a winery to see what was causing the hold-up with production.

The group set off from Vallaki early in the morning, to make the long and potentially dangerous trip to the winery. Just out of town and over a bridge they came to a crossroads, and standing at the junction was a man. A tall, striking, well-dressed man, absent-mindedly twirling some crystal spheres. He told them he was looking for a friend, a beautiful woman named Ireena, last seen travelling from the village of Barovia…

It didn’t take the party long to see that something was amiss, and all doubt was removed when the man eventually introduced himself as Count Strahd von Sarovich. The questioning then…intensified, and involved dire wolves and attack rolls.

Strahd was content to toy with the players and let his wolves do the work. The players took the hint and retreated, but then clustered together on the bridge, taking potshots at the vampire. So he gave them a little parting gift: a thrown crystal sphere, which exploded into fireball at their feet. All the players went down, but most stabilised, or were stabilised by the one player who recovered. The bard, rest his soul, took so much damage he died outright.

Yeah ok, I used Fireball against a level 3 party. But it’s Strahd! He doesn’t play nice.

I do really like the idea of this adventure allowing Strahd to pop up and ruin everyone’s day; and I figured after Death House, saving Ireena, and then burning down a nest of vampires, the party had caught his attention.

So the party wake up in the Vistani (the traveller people) camp at the edge of town. It seems their charred bodies had been found by a passing traveller and brought there to be nursed back to health (their purses were also ‘unburdened’ significantly). Conveniently there was also a wizard (of the same PC level!) who had been living with the Vistani since arriving in Barovia some time ago.

The Vistani had their own problem: their leader’s daughter had gone missing a couple of days ago, and everyone feared the worst. The party were quick to step in, and their expert investigation skills (seriously – I don’t think anyone in the group has a negative intelligence modifier) soon lead them to the girl. Unfortunately they found her just in time to witness her being thrown into a lake while tied up in a sack. A mentally-challenged hermit who lived by the lake believed the Vistani were lucky, and so he thought this would be a great way of catching more fish. Long story short: the party rescued and resuscitated the girl, brought her back to her family, and the crazy fisherman was executed by her father.

This ended up provoking a debate on mental capacity (i.e. should the fisherman be ‘brought to justice’ if he clearly doesn’t understand his actions or mean malice by them?) that was waaaaay outside what you’d want to cover in an RPG. From now on they’re only fighting vampires and witches and other things clearly defined as evil to avoid any more discussions on morality.

After the mother of all sidetracks, they set out for the winery once again. This time promising to bring some wine back to their Vistani friends too.

Ooh I Could Crush a Grape! 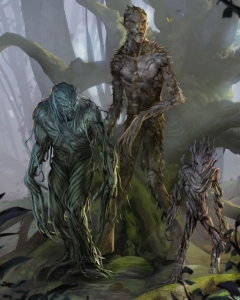 Obviously getting hold of barrel of wine or two wasn’t going to be easy, this is Ravenloft! It turned out that the wine wasn’t being delivered anymore, because the family that owned the winery (who happened to be related to the tavern owners) had been kicked out by some druids. Who have a small army of twig blights too.

The players disturbed the blights hiding in the vineyards, so quickly took shelter in the winery. It then became a mini dungeon-crawl, with 3 druids dotted throughout the building, supported by their irritating blight friends. The big boss druid gave them trouble, turning into a giant spider and using hit-and-run tactics. But they managed to hack their way through whatever came at them, and overcame the druids. The boss carried a staff which dripped with evil power, which no-one really wanted to touch, but apparently had some control over the blights. Davian -the owner of the winery- destroyed it for them, causing the blights to disintegrate and die.

Retaking the winery earned the party the trust of the owners, who explained that for years their crop had been so good due to three magical gems buried in the fields. These had been taken one-by-one over the years, the last apparently by the druids a few weeks ago (they were also reasonably sure that the witch Baba Lysaga had one, but they weren’t about to go ask for it back).

Returning the Vallaki, the group escorted the wine delivery, cementing their new friendship with the inn keeper and his ‘family’ and the Vistani just outside town. The Vistani recommended that the group should go see Madam Eva at the other Vistani camp near Borovia; rumour is that she can see the future, so she might be able to help them.

On the way was the old windmill too, rumoured to be the source of these ‘Dream Pastries’ that were causing such trouble in town. And it was only inhabited by a few old ladies (or maybe young ladies? Maybe they were mother and daughter? The rumours were confusing), what trouble could it cause them?

Ding Dong, the Witch is…

In news that will surprise exactly no-one, the old ladies who lived in the windmill were hags. The Paladin of the group figured this out using his ‘divine sense’ ability , and then informed the rest of the party quite loudly (it was a really terrible deception roll). And things tend to kick off when you walk into a Night Hag’s home and accuse her of being a demon.

Action economy is a bitch, and after 2 or 3 rounds the hag (Morgantha, although no-one bothered to ask) had taken quite a lot of damage and decided to leave – apparently using some kind of stone and vanishing before their eyes.

A bit of investigating the windmill confirmed everyone’s worst fears: the hags were using the windmill to grind up children’s bones to make the dream pastries. Upstairs, in the hag’s living area were two living children, locked up in a cage and being tormented by a young woman (with long, lank hair covering her face…). Seeing their chance, the group sprang to attack, and quickly overpowered the sea hag (although they were set back by her horrifying face, and were dealt a few good hits).

Freeing the children, they decided the best course of action was to torch the place, so that the Dream Pastry supply could be properly interrupted. Morgantha reappeared to defend her home once again, and once again was driven off. The group also found a few interesting potions, and hidden away in the attic was a dark, mysterious tome, bearing the insignia of Strahd himself.

This location was another Ravenloft TPK-in-waiting. By the book, the windmill (The Old Bonegrinder) contains 3 Night Hags, in a coven. Go do the sums: that’s a hard encounter for a party of level 11 characters! I decided to tone it down for this encounter, but Morgantha will be back!

The group were feeling pretty cocky after two (mostly) successful excursions, but I’m sure it won’t last…

Next stop, the Vistani camp- to have their fortunes read.

5 thoughts on “Curse of Strahd 3: The Wine, The Wizard and The Windmill”